Are you eyeing a spot in the next X-Games or maybe an off-road bike racing or stunt competition? If you are, there is a good chance you are asking yourself, what is a BMX bike? You see, only BMX bikes have the indispensable design and components to make bicycle moto-crossing possible.

Let us forget mountain bikes, racing cycles, and road bicycles for the meantime as we explore everything you must know about BMX bikes.

What Does BMX Stand for 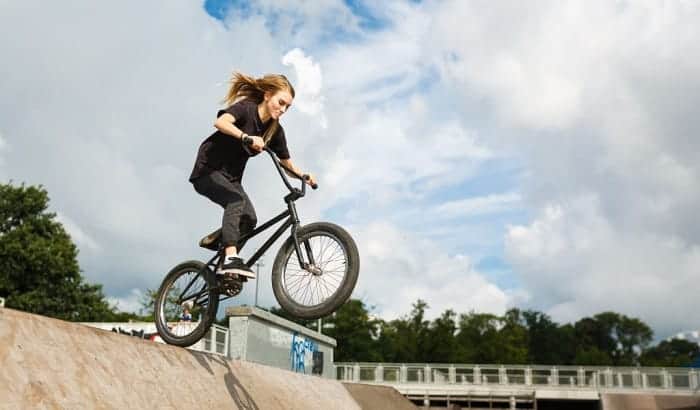 The term ‘BMX’ is the acronym for three words, bicycle (B), moto (M), and cross (X). If you are familiar with motocross, you will have a fair understanding of what a BMX bike is. The only difference is that these vehicles rely on pedal power while motocross machines have powerful engines.

There are many definitions of a BMX bike. However, its unique design suggests this bicycle is suitable for performing stunts, off-road racing, freestyle riding, and bike street racing. While you may see X-Gamers performing dazzling maneuvers in half-pipes, BMX bikes feel right at home on the dirt.

As we shall discuss later, a BMX bike’s gearing is different from that of a mountain bike or racer. It is also smaller than mountain bikes.

How Different is BMX Bike Gears to Other Bicycle Types

Understanding the BMX meaning requires an appreciation of its unique differences from other bicycle types.

BMX riders can choose between two gear configurations: tall and short. The classification depends on the number of sprocket teeth – the more teeth the sprocket has, the taller the gear is.

Racers often choose a BMX bike with tall gearing, while flatland riders and some bikers prefer short gear ratios because they are suitable for stalls and grinds on a vert or street course.

What is the History of BMX Bikes

No one knows who developed the very first BMX bike or when it first came into existence. However, BMX enthusiasts say the origins can be traced to the early 1970s or as early as the late 1960s.

Interest in the bicycle gained momentum with the screening of the 1971 docu-film On Any Sunday that featured modified and makeshift BMX bikes in the opening credits. The scene presented young boys having the time of their lives racing on dirt trails and vacant lots.

Not long after, almost every other kid in SoCal wanted to have the Schwinn Sting-Ray BMX bike featured in the film. Many parents considered the bicycle safer for children to ride on dirt tracks than actual motocross motorcycles.

The Sting-Ray is the granddaddy of BMX bikes. It featured an aggressive build, a small frame, a banana seat, and tall handlebars.

Over the years, BMX manufacturers sought to improve the Sting-Ray’s design, making the bike more agile and better suited to handle high jumps, hairpins, and other obstacles on the dirt course.

The BMX craze was in full swing by 1977, with bike races mushrooming throughout the West Coast.

Freestyle BMX riding developed from the growing interest in the bike. This form of BMX biking allowed riders to take their two-wheeled vehicles virtually anywhere, performing grinds, flips, spins, and other stunts.

The last two decades of the 20th century saw the inclusion of niche styles into BMX riding, including vert and flatland.

What are the Different BMX Bike Types 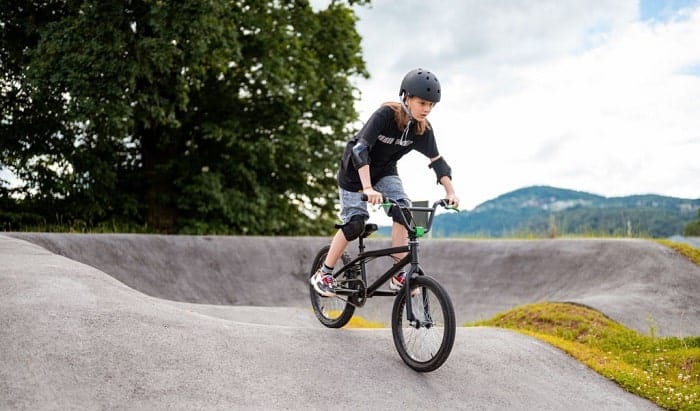 The historical development of BMX bikes results in several types of these bicycles, depending on their use. We can classify them into four principal types.

The original BMX bike of the late 1960s to the early 1970s is perfect for racing across a dirt track. BMX racers performed multiple jumps, berms, and turns while attempting to cross the checkered flag first.

It is a phenomenal display of biking skills, maneuvering the course, and avoiding crashing into other riders.

The BMX racing bike is lightweight to allow the rider to go fast. The bicycle is also stable and maneuverable, allowing the biker to control his ride without undermining speed and competitiveness.

The bikes feature a low-profile and thin design mated to 20-inch wheels to strike a balance between speed and traction. The frame is tall to give the rider better handlebar control and an excellent line of vision.

It has a longer crank, allowing the rider to capitalize on his pedal power and improve efficiency. The rear brake is strong, giving exceptional stopping power on the dirt track.

Freestyle BMX riders can take their bikes almost anywhere. They can turn ordinary streets and skate parks into their playground. The main difference between freestyle and other BMX bikes is the emphasis on airs and stunts instead of speed and jump handling.

Freestyle BMX bikes have front and rear wheel pegs for standing, stalling, and grinding tricks. The frame is heavier than that of a racing BMX bike. They also have a full brake setup and short gearing.

The BMX bike’s tires are smoother, ensuring speed and traction. The bike frame has extra reinforcement to deal with impact forces. Rear and front brakes are also a must.

Vert BMX bikes are similar to street BMX bicycles with few modifications to accommodate the biker’s style. For example, the bike frame must be strong yet lightweight to allow maximum airiness while ensuring the bike will not break in a hard landing.

The goal of vert BMX biking is to achieve the greatest height by riding from one edge of the halfpipe to the other, gaining speed in the process, and launching the bike into the air. The BMX vert rider executes different stunts in mid-air before maneuvering his bicycle back into the halfpipe.

Park BMX riders take their bikes to a designated place for skateboarders and bikers, complete with various concrete and wood features for doing stunts and tricks. For example, many of these bike park courses have halfpipes, stairs, bowls, rails, quarter pipes, boxes, and ramps.

BMX bikes for park courses have a thick frame to ensure better impact resistance. The bicycle also has double brakes, smooth tires, and a small cassette and crank.

Dirt BMX bikes bridge the gap between racing and freestyle BMX bikes. The ride focuses on the frequency or height of jumps a BMX rider executes on a dirt track. That is why BMX organizations also call this style of BMX riding BMX jumping.

The bike is highly maneuverable, lightweight, and can take hard landings with ease.

This style of BMX biking is more of a dance performance than competition. The rider could not care less about speed or getting the most air out of every jump. What matters is the number of tricks the rider can execute within a small space.

The biker can walk across the bike frame while keeping the bicycle in an upright position. He can perform various twists and spins along the bike’s axis or execute a wheelie with the bike on a single spot.

Flatland BMX bikes have a different build compared to dirt, racing, and freestyle bikes. It has a smaller and more compact frame to ensure better clearance during trick and stunt execution.

The bike also features a zero-offset fork and a freecoaster hub, allowing the rider to spin the rear wheel backward without cranking. Both features also improve balance, helping the BMX biker in executing different stunts.

These BMX bikes can also have various brake setups, four pegs, and short crank arms. The tires have maximum inflation and the seatpost is long.

Learning and appreciating the answer to the question, ‘what is a BMX bike?’ can help you decide what type of bicycle motocross rig you want to buy. Everything boils down to what you want to do, whether to race, perform stunts, launch yourself into the air, or dance with your bike.

“Bike commuting should be the trend for the next few years, and it is a convenient and eco-friendly way for us to travel. And we are here to make it a bit less troublesome for people who want to maintain their vehicle for a long time. So, the content I expect to put out here is offering help for bikers who are facing issues with parts of their bikes once in a while. Let’s have fun and protect the environment together!”